Last night the 2008 softball season ended for the State College E-Free team. Here is a brief discussion of the season and a few notes. 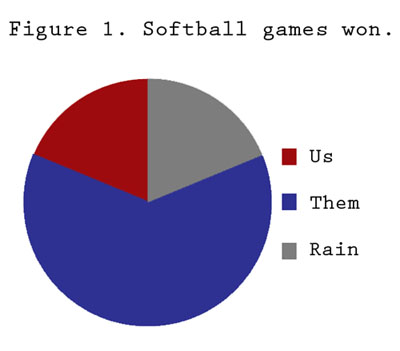 The team finished with a 3-10 record (one of the wins was a forfeit) and 3 rain outs. I must admit that the fact that we won two games surprises me. If you had offered me straight up odds on us winning two games I would have put a grand against it. Of course, then I would be banished from church softball for life for gambling on my team. And I would have lost a thousand bucks. Though I might have gone all 1919 on my team and iced the bet through managerial hijinx and suspiciously lackadaisical play.

Pitching. Pitching was one of the highlights of the E-Free team. Adam Wilson had a Steve Carlton 1972-like season, accounting for either 100% or 67% of the team’s wins (it depends how you view the forfeit). The team pitching staff ERA was also very low due to a staggering amount of the runs scored against E-Free being unearned.

Defense. The defense was bad. In the six games that I counted errors we committed 46 of them. And I was lenient in my scoring. To put the number of errors into perspective, we only scored 36 runs during those six games . . .  (our opponents scored 134 runs in those games). I find it quite humorous that our team name is E-Free.

We averaged more than one error in every inning we played this season.

Offense. The offense was better than the defense, unfortunately that’s not a ringing endorsement. Figure 2 shows the OPS of each of the 20 players that played more than two games for the team (we had 28 different players during the season, but eight of them played two games or less). The team OPS for the season was 0.907, which is not good for slow pitch softball. So what does this tell us? Well, it means we were not very good at getting on base or hitting for power.

An interesting trend developed with the team batting average (Figure 3). The average for the first seven weeks was decidedly lower than the last five weeks. In fact, when the mean average for the season is considered (0.384), each of the first 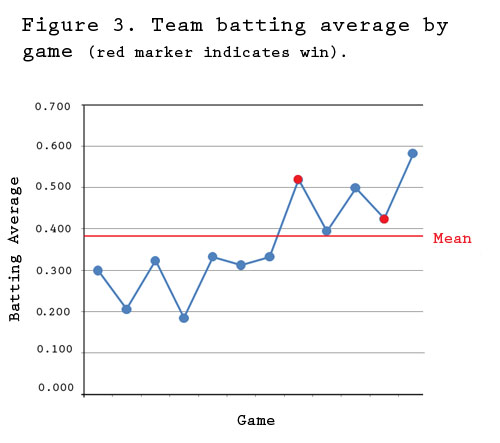 seven weeks fall below that average . . . while the last five weeks check in above the average.

Summary: I now feel more empathy for the Kansas City Royals and the Pittsburgh Pirates.

From 1997-2003 I played softball for Upper Skippack Mennonite Church (USMC). During that time we made the play-offs every season, with four trips to the championship series. We managed to win two championships (1997 in our only season in the B league, and 2000). We were never very good at taking team photos, but I do have this shot that was taken near the end of the 1999 season: 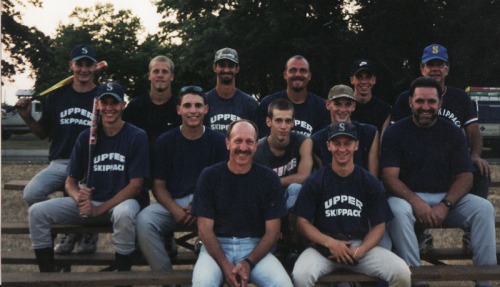 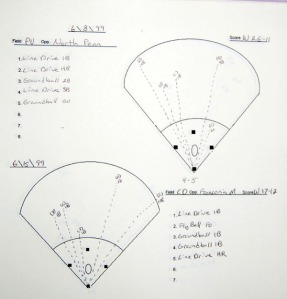 I recently browsed through my softball records from 1998-2000. I have every at bat charted (at least every regular season and post-season at bat . . . I don’t have exhibition games or tournament games charted). If you look at my numbers during that time period, you might be tempted to make a steroids joke about 1999.

My softball records also include pages of notes about each team we played. I have ratings for the arms of outfielders, propensity to take extra bases, preferred field to hit to, and other things I observed. I was unable to locate my records from 2001-2003, they must be packed away with my notes from Temple U. Someday I will sort those boxes out. . . 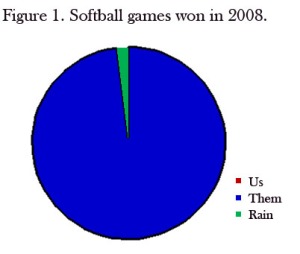 This is my inaugural season as the manager of the State College E-Free softball team. On the field things have been a bit rough. Our first win has been as elusive as Barry Sanders in the backfield. Thankfully everyone has maintained a good attitude about it. I’m fine as long as I do not consider our games actual softball games . . . I view them as slightly organized recreation of a softball-like nature.

Yes, that first win has been elusive. So far the rain has won more games than we have (I assume that that the rain’s goal is to get the game cancelled). 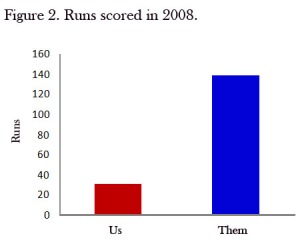 of more than 100 runs (108 to be exact). I’ve heard that losing builds character. Now I’m beginning to feel almost guilty. Our team is greedily seizing all character building opportunity from our opponents. It’s about time we thought of the character of others.

Here are a few numbers that speak volumes about our team performance:

After the news of Willie Randolph’s firing last week I have been waiting for my 3am phone call.