What Does the Best Regular Season Record in MLB Mean?

The Phillies finished the 2010 regular season with the best record in MLB. This accomplishment is all the sweeter when the barrage of injuries the team faced are considered. Now that we’ve reached the interlude between the regular season and the postseason the question looms: aside from homefield advantage in the NL play-offs, what does the best regular season record mean? Here are a few numbers regarding the best MLB regular season record since the expansion to three divisions in each league (discounting 1994 because there was no postseason).

Does regular season performance translate to postseason success? Between 1995-2009  the postseason results looked like this: 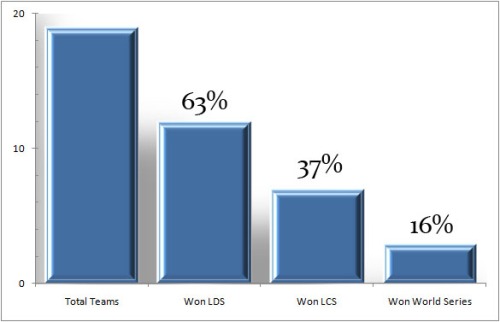 Postseason baseball is wonderful. I think it is a travesty that the division series are only best of five games, but I guess nothing is perfect.

A Few Suggestions for MLB

I believe (and this is as strong as my belief in the law of gravity) that baseball is the perfect game. Major League Baseball (MLB) is the ultimate form of the game, though I’m happy watching any level of baseball that is played with wooden bats.

During the winter baseball is alive and well. This is when roster moves, projections, and hope for the upcoming season are topic of discussion. The offseason is also a good time to think about rule changes and the long-term future of baseball. And that is where I’m at right now, here are a few of my thoughts on changes for MLB:

The MLB regular season was extended from 154 to 162 games in 1961 (American League) and 1962 (National League). At the time there were more doubleheaders and a shorter postseason, so the adjustment worked well. Since the sixties baseball has reduced the number of doubleheaders and extended the postseason by adding a wildcard system. Baseball now runs into November.

This is a great time to return to a 154 game season. Many of the records accumulated over 162 game seasons are now in doubt due to the steroid era. It is a good time for a scheduling shake up. This ties in to my next point:

Expand the LDS to Best of 7

As it currently stands, the easiest series to pull an upset is the LDS because it uses a best of 5 format. I’d like to see this expanded to best of 7. Adding the additional one or two games in the postseason would be offset by the 8 game reduction to the regular season.

Attempt to Fix the All-Star Game

I’d like to see the voting take place in a narrow window before the game, so that the actual performance of the players can be gauged. The current voting system starts way too early. A disturbingly high percentage of “baseball fans” are idiots (though I suspect it is merely a reflection of the population), and they choose poorly when it comes to the All Star Game roster.

If the All Star Game must determine home field for the World Series, then balance the fan vote with a players/coaches vote. But a better solution is:

Change the Way Home Field is Determined for the World Series

The team with the best regular season record should host. That is the easy solution. In the event of identical records use head-to-head match-ups if possible (which grieves me, for I despise interleague play). In the event this does not break the tie, use a coin toss.

I’d rather see a coin toss decide home field than an exhibition game played months before.

And those are just a few of the things I’ve been thinking about as I wonder why the Phillies are trying to sign Juan Castro.

A new development. Last night at 11:47pm my neighbor began playing the recorder. It’s the first time I have ever heard recorder music coming from that apartment, and it was of exceptionally poor quality, so I assume it is the first time he/she played. This afternoon a belated encore followed. I am hoping this is a short-lived hobby.

The Eagles do not deserve to make the play-offs. For a moment things looked really good. Dallas lost last night, and then Tampa Bay lost this afternoon. But all the good feelings ended when the Eagles forgot to show up for their game. Credit is due to the Redskins, they shut down the Eagles’ offense and played mistake-free football. While the possibility of a play-off berth is still in play, the odds are not good.

I’m happy to see Rafael Furcal remain in Dodger blue. For a moment last week it looked like Furcal was going to end up in Atlanta (again). Thankfully Furcal’s agent is unethical shrewd  and got him a better deal. I view the Mets as the Phils most serious competitor, but with a few additions the Braves still scare me.

A good poker game. I bet it would be really fun to play a casual poker game with Ron White, Gus Johnson, Owen Wilson, Charles Barkley, and Joe Paterno. Just think of the conversations that could happen. It makes me happy just imagining it.

In the spring of 2006 I watched some of the World Baseball Classic (WBC). I’m a baseball junkie, so by the time the spring rolls around I’m pretty desperate for baseball. That being said, I’m not a big fan of the WBC. I realize that Major League Baseball and the MLB Players Association have sanctioned the event (in fact they helped create it). International baseball competition is great, but I don’t want players from my team (ie Philadelphia Phillies) to be missing Spring Training to play in the WBC. I’d rather see collegiate or minor league players represent the US.

When the Phillies announced that Cole Hamels, Brad Lidge, and Ryan Howard have declined to join the Team USA WBC roster I was thrilled. J-Roll will be on the team (I think as Derek Jeter’s back-up . . . what’s wrong with that picture?). Having a few position players on the team doesn’t bother me, but I am adamantly against having pitchers on the squad.

I look at the WBC as somewhat of a joke because I don’t value the championship all that much. Winning the WBC would mean about as much to me as the Philadelphia Soul’s AFL championship in 2008. That’s not saying much.

Baseball is all about the World Series.

Last night I fought insomnia and it was tougher than Kimbo Slice. In lieu of counting sheep I decided to select my favorite player from each MLB team. The player had to be active during my lifetime. I based my selections upon a mix of skill level, personality, particular accomplishments, and fond memories.

So here they are:

The last thing I remember was feeling remorse over some of the players left off the list, so I decided to select an honorable mention or two for each team. I was about halfway through this list when I landed a right hook on the elusive insomnia. ZZZZZZZzzzzzzzzzzzzzzz.