I find it interesting to see what percentage of the cereal is sugar by weight. It’s a bit depressing. I now understand why Honey Smacks used to be called Sugar Smacks. 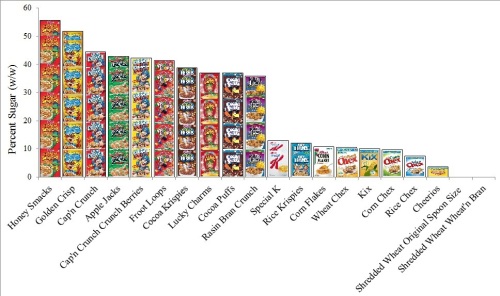 Breakfast cereal percent sugar on a weight by weight basis: the top five and bottom five of the cereals I analyzed.

Calories are another interesting thing to analyze with sugar. 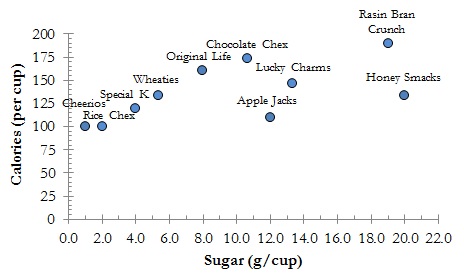 Breakfast cereal calories and sugar per cup plotted for some common products.

I’ve also looked at sugar and protein, which I plan to post about later. Right now I don’t have time to develop this post any further. . .

Over the past few days I’ve been thinking about cereal servings frequently. More specifically, how small recommended serving sizes are. I eat one serving of cereal for breakfast about as often as Queen Elizabeth listens to Metallica.

Here is a quick look at serving sizes illustrated with Cheerios. The bowl used for this exercise is a 99¢ Wal-Mart cereal bowl that has a 6 inch diameter at the top. In my opinion it has the perfect dimensions for a cereal bowl. First we have one serving (1 cup). 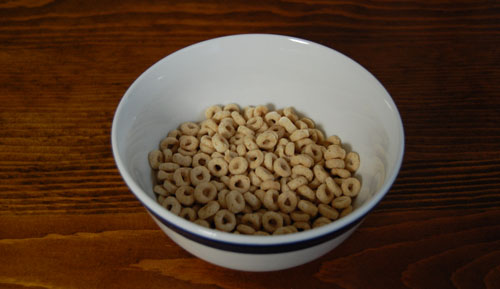 One serving of Cheerios (1 cup).

The only time I eat a bowl of cereal that looks like this is when the box runs out mid-pour. This is the type of breakfast runway models eat. Let’s try two servings. 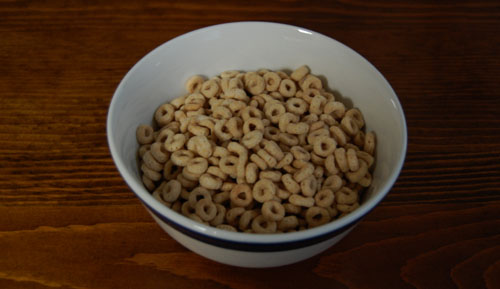 If I’m not particularly hungry I might settle for this as a light breakfast. But on most days I’d still be pouring. 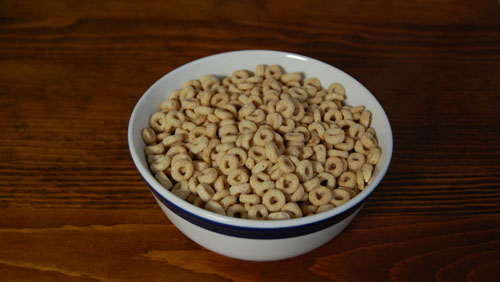 And at three servings the perfect level has been reached. Full enough to be called full, yet not overflowing. Three servings = a normal breakfast. If these were Honeynut Cheerios it would be a four serving breakfast.

So my normal bowl of cereal does not look like the recommended serving at all. I’ve noticed that television commercials for cereal seldom show a full serving. Most shots of people beginning to eat a full bowl of cereal are shot with the bowl hidden or from a low angle so the amount of cereal in the bowl is not visible. The shots that show the inside of the bowl are saved for late in the commercial when most of the cereal has already been consumed, or at least the viewer is supposed to assume this (sometimes there is nearly a full serving left in these shots).

On the front of boxes cereal bowls are often depicted. I think part of the reason these images are magnified is not to show you the texture of the cereal (like the disclaimer states), but rather to throw off your ability to judge the scale of the serving. I think this is also part of the reason many pictures include fruit on or in the cereal. Sure it adds color, but more importantly it also adds mass to the inside of the bowl.

Take a look at this Cheerios box. 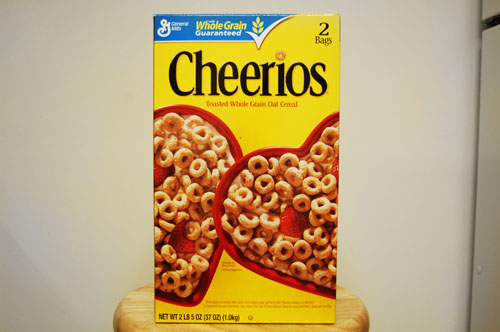 Does this box give you any feel for a serving size? In between the two bowls there is some fine print. Here is a close up. 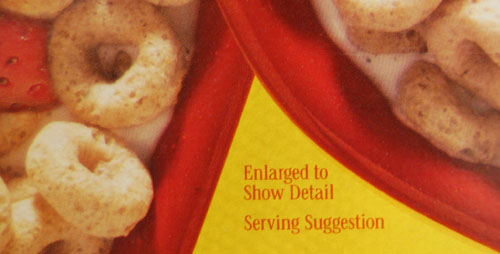 The disclaimer says the picture has been enlarged to show detail. I guess that works better than the more truthful Enlarged to Disrupt Your Sense of Scale. Maybe I’m wrong. Maybe the public is dying to know what the pores in a Cheerio look like.

Underneath the disclaimer is confirmation that the picture is supposed to depict a recommended serving. A recommended serving in an odd shaped bowl that is not fully pictured that also contains added fruit which is not part of the serving. Oh I get it; it’s all so confusingly clear now.

I’d like to state that while I used pictures of General Mills Cheerios as examples in this post I do not think they are any worse than other cereal brands or products. I’m not trying to single out Cheerios, I just happened to have them in my kitchen.

The next time you walk down the cereal aisle at the grocery store look at the boxes and see how many clearly depict a serving size. When you see a commercial for cereal on television watch for a good example of a serving size (or go to YouTube and watch commercials there). Marketing departments are good at hiding things.

And now I’m curious whether or not Queen Elizabth has ever listened to Metallica.

Yesterday I was running a quick errand at the end of the day and I had a few moments to kill, so naturally I found myself wandering around Ollie’s Bargain Outlet. The store was quite busy, I attribute the pick up in patronage to the economic downturn.

Anyway, the thought crossed my mind: I wonder if they sell cereal? Cereal lasts a long time and is sealed. So I headed for the food secti0n. 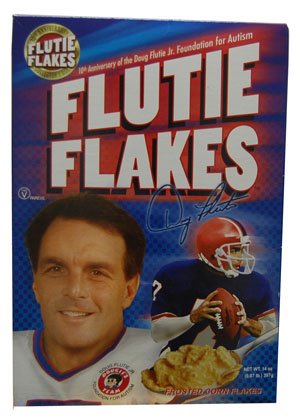 The first cereal to greet me was Flutie Flakes. I had heard of them, but never actually seen a box for sale. Sold. I picked up a 10th Anniversary Collector’s Box with glee. Doug Flutie’s smiling face reassured me I had made a wise move. On the box Doug is wearing a nondescript football uniform, since the cereal is not licensed with the NCAA or NFL. On the back of the box there is an order form for Flutie Flakes gear (T-Shirt, pin, stuffed bear).

Right beside the Flutie Flakes were rows of Florida Gators Frosted Corn Flakes (2008 Limited Edition, no less). The box features Chris Leak, Danny Wuerffel, and Jack Youngblood wearing authentic Florida uniforms (this cereal is licensed with the NCAA). On the back of the box is the following slogan: “Refuel with Ch 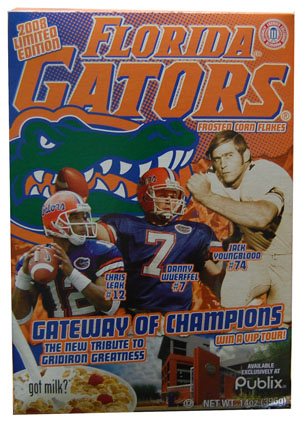 ocolate Milk. Chocolate Milk-Beverage of Champions.” And then there is a quote:

For as long as I can remember I’ve been a big milk drinker. From the time I started playing sports as a kid all the way through my college and professional careers, milk has been a part of my daily diet. Even to this day, I fully believe in the benefits of milk and would recommend it to anyone who leads an active lifestyle. – Jack Youngblood (University of Florida Hall of Famer)

I picked up a box of Florida Gators Frosted Corn Flakes too. It was the right thing to do.

Today I performed a taste test of the two cereals. They are nearly identical, and both taste remarkably like Kellogg’s Frosted Flakes. The only differences I could see was that Flutie Flakes were a bit larger in size. Nutritionally the cereals are very similar. Flutie Flakes contain slightly more sodium, sugar, and potassium while Florida Gators Frosted Corn Flakes contain slightly more iron.

I might venture into the discount cereal aisle again. Who knows what obscure cereal I might find? Of course the holy grail is Smurf-Berry Crunch. I can still recall how this cereal tasted, smelled, and how inexplicably wonderful it was. If I found it for sale I’d probably buy a case. . . 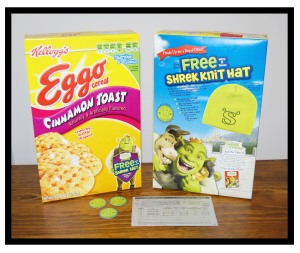 When I was a kid I used to eat cereal for breakfast 98% of the time. I would collect the UPC codes from the boxes, storing them up in case there was a good mail-in offer. My favorite yearly promotion was the Post baseball card set. I would eat Post cereal exclusively during the summer. But no matter how many boxes of Post cereal I ate, I always came a few cards short of collecting the entire set. So I would send in five UPC codes and get the full set. Good times; good times.

It’s been a long time since I collected UPC codes for anything. A couple of weeks ago I was doing my grocery shopping, and I noticed Kellogg’s Eggo Cinnamon Toast cereal. I also noticed there was a Shrek hat mail-in offer. . .

Now I do not wear knit hats. It has probably been more than 10 years since I have put a knit hat on my head. I have little desire to wear the Shrek hat. But I decided I wanted it.

You see, there is something nostalgic about the pursuit of a cheap novelty. Especially when that pursuit causes me to eat one cereal exclusively for a month.